Bethany is about two miles east of Jerusalem on the eastern side of the Mount of Olives. It is also located on the West Bank side of the Israeli separation wall. We traveled there to see Lazaruth's tomb and a couple of other sites near this location. Bethany means "house of the poor." The town was originally called Lazarion and was given by the Byzantines in honor of Lazarus. 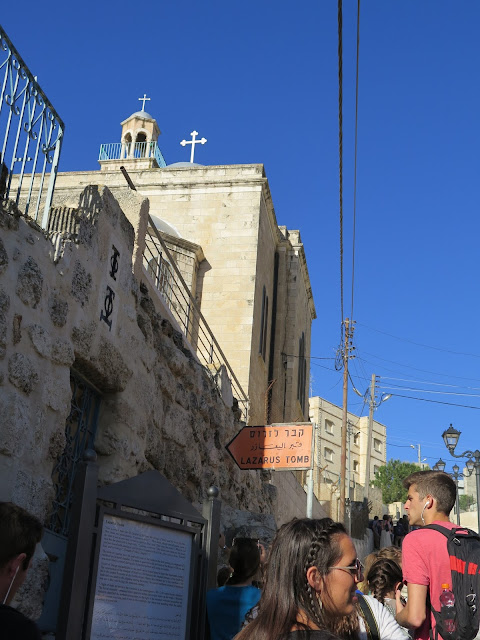 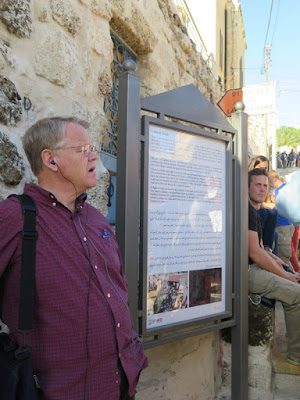 Photo: Dr. Skinner leads the group. The tomb of Lazarus is composed of a vestibule and a burial chamber. The tomb is quarried in the soft rock in the Mount of Olives and most likely covered during the Byzantine period with stone or marble. 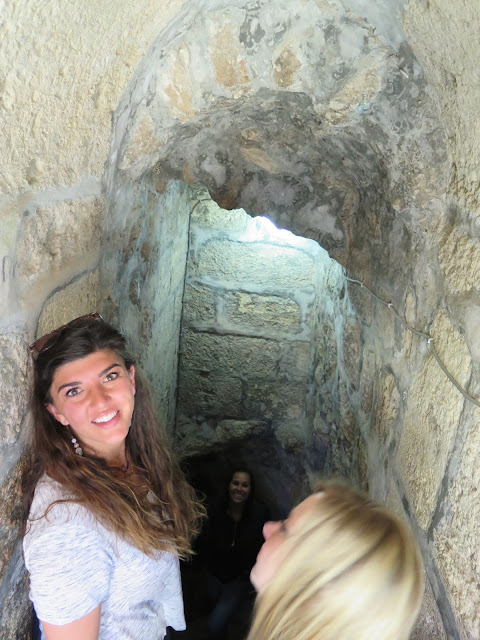 Photo: The opening into the stairwell to the tomb. 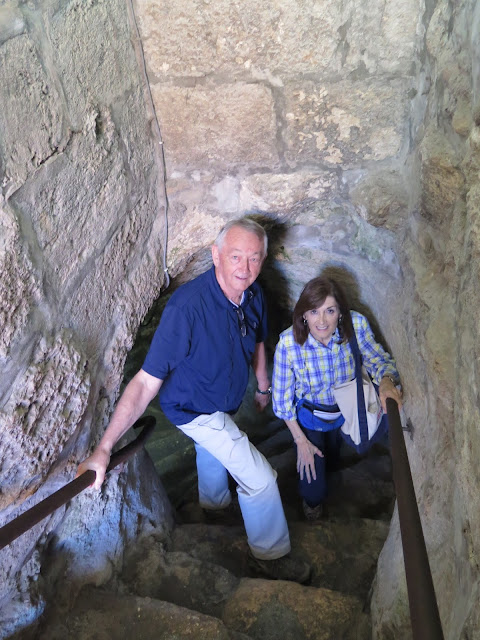 A flight of very steep steps led down to the vestibule to the inner square burial chamber which contained three funerary niches hewn into the walls. This is where Lazarus was laid and it was in the vestibule that Jesus was standing when Lazarus was raised from the dead. Lazarus was the brother of Martha who was the sister of Mary. In St. John 11: 1 44 we can read the entire account. Verse 21: Then said Martha unto Jesus, Lord, if thou hadst been here, my brother had not died. 23: Jesus saith unto her, "Thy brother shall rise again." 25: Jesus said unto her, "I am the resurrection and the life; he that believeth in me, though he were dead, yet shall he live." 39: Jesus said, "Take ye away the stone." 43: He cried with a loud voice, "Lazarus, come forth." 44: And he that was dead came forth, bound hand and foot with grave clothes: and his face was bound about with a napkin. Jesus saith unto them, "Loose him, and let him go." 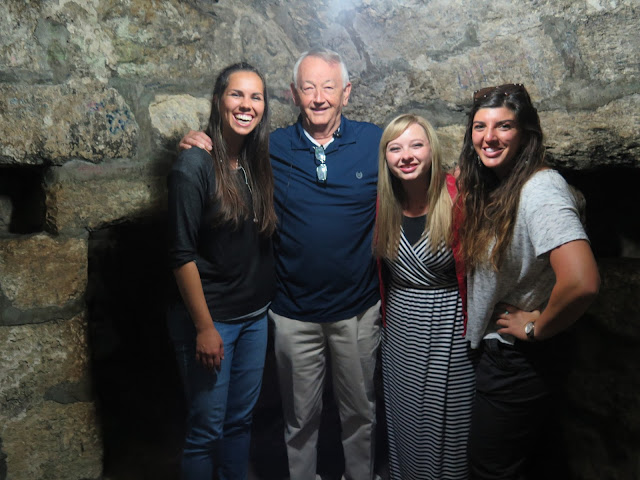 Photo: The opening into the tomb was very low and we had to crawl into it; it was only 7' square. 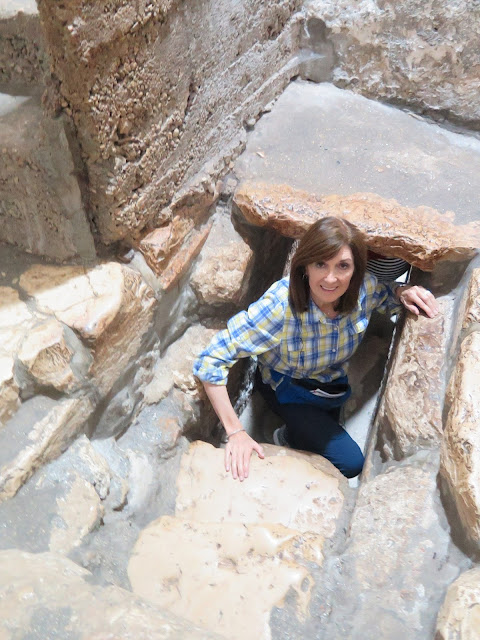 Photo: Coming out of the tomb. 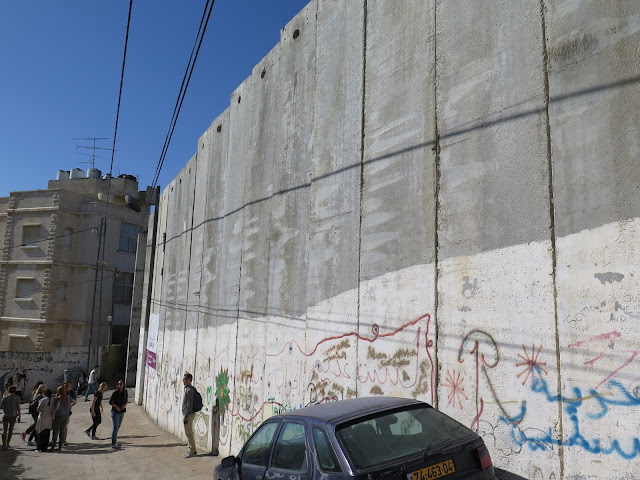 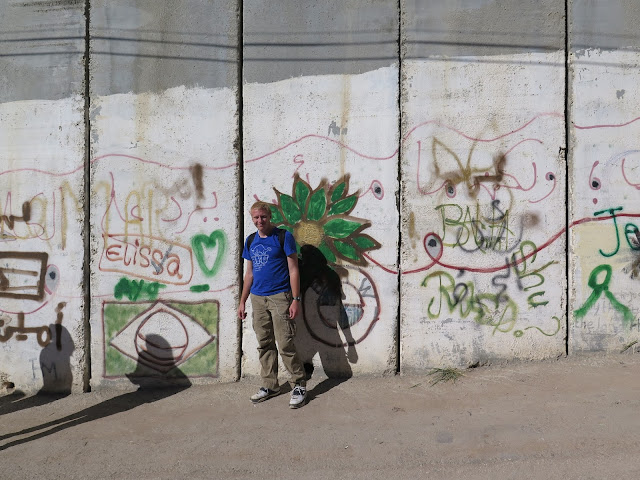 This is the "separation wall" which cuts right through the town of Bethany and Bethphage. It is a reminder of the current status in the Holy Land and a controversial move by the Israeli government. The wall is 500 miles long and ranges in height from 30 to 40' in some sections. Because of almost daily terrorist activities, the Israeli government decided to put up this wall as a protection from the West Bank and immediately there was a decrease of 80-90% in bombings. However, 15% of the West Bank has been eaten up with the wall and there are automatic machine guns that are remotely controlled to shoot anyone who tries to cross. 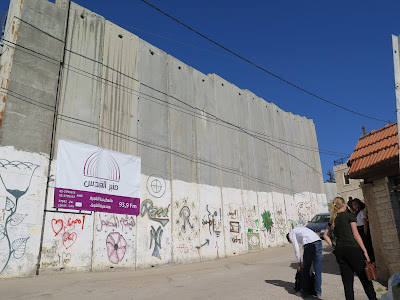 Because of the separation wall, it took 45 minutes to drive just two miles as we had to drive around it. 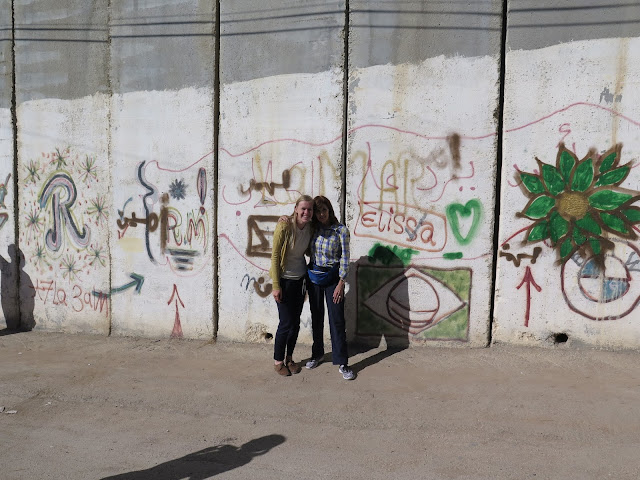 Photo: Kam and Kathy. The sad part of building this wall is that it intrudes some formally Palestinian areas. The wall cuts through farms and divides families. Farmers have to get permission to cross through the wall to till their lands and families who want to gather for reunions have to get permission to do so. Therefore, the wall has created great animosity between the Palestinians and the Israeli government. Frustration is still growing and as a result, Israeli soldiers have been the target for stabbings at Damascus Gate as well as bombings in Jerusalem. Just two days ago, a bus was blown up in Jerusalem. We are so grateful for the freedom we enjoy and that we live in a free country. 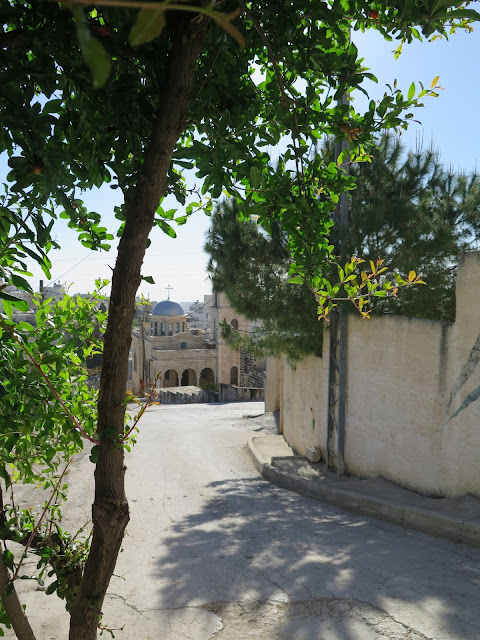 We walked back down the street to the church which is built just east of Lazarus's tomb. To honor the town of Mary, Martha and Lazarus, as well as Jesus' raising of Lazarus and his eventual resting place, a church was built near Lazarus' presumed burial cave in the 4th century. It was then destroyed by an earthquake and a church was replaced by another in the 6th century AC. In the 12th century a convent of Benedcitine nus was added to the complex and the convent's chapel was built directly over the tomb of Lazarus. After the 14th century, a mosque was built over the tomb. Note: Muslims also commemorate the raising of Lazarus. The local Muslims originally allowed Christians to worship in the tomb through the mosque but eventually denied Christians access. In response, Franciscan monks cut a new entrance to the tomb in the 16th century and the Franciscans built a new chapel next to the mosque in 1954. There is so much history here and we don't take this opportunity lightly to be where we are. 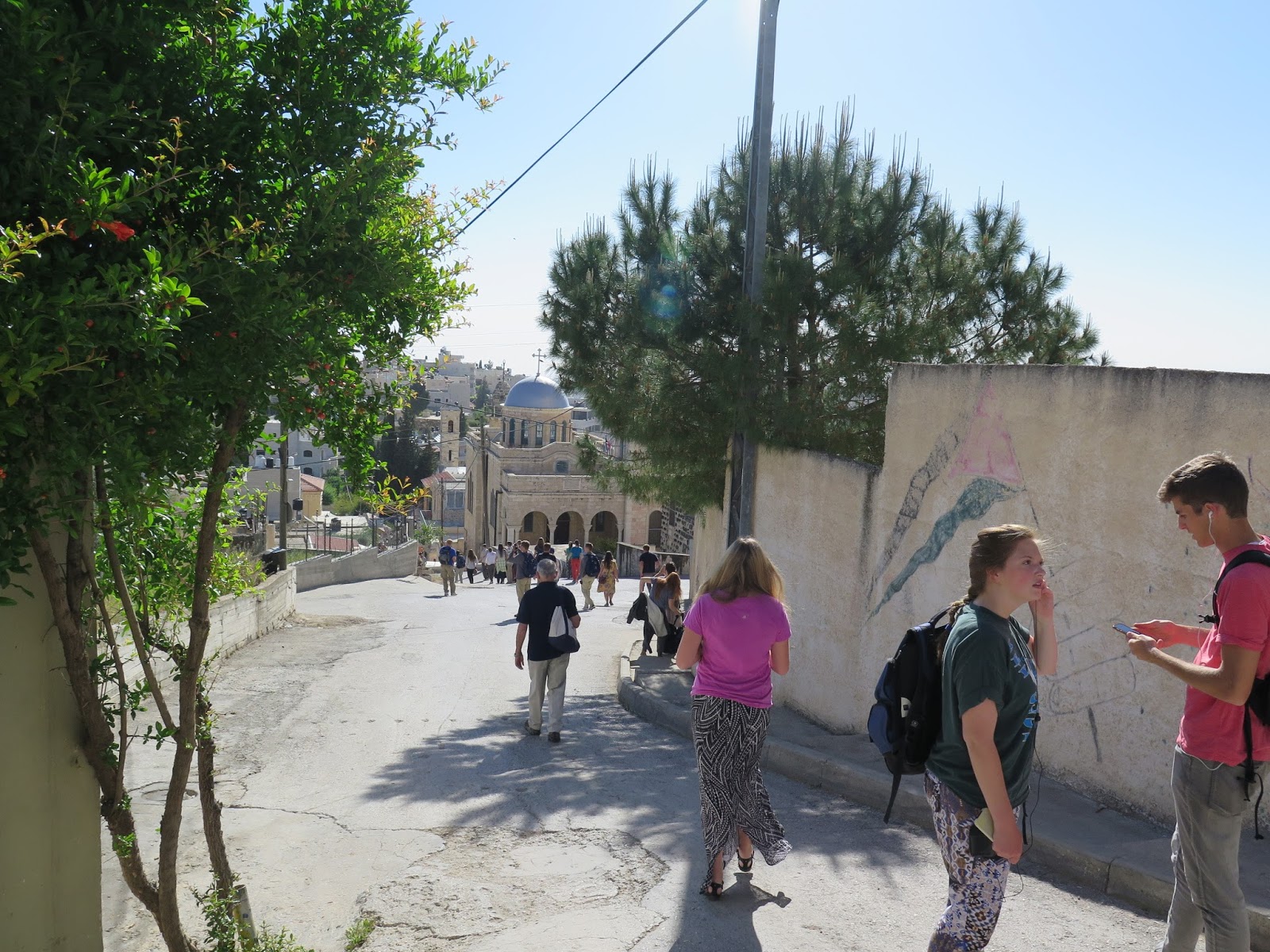 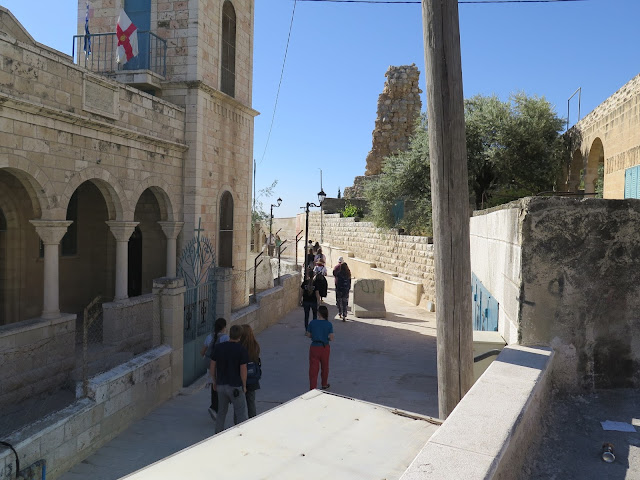 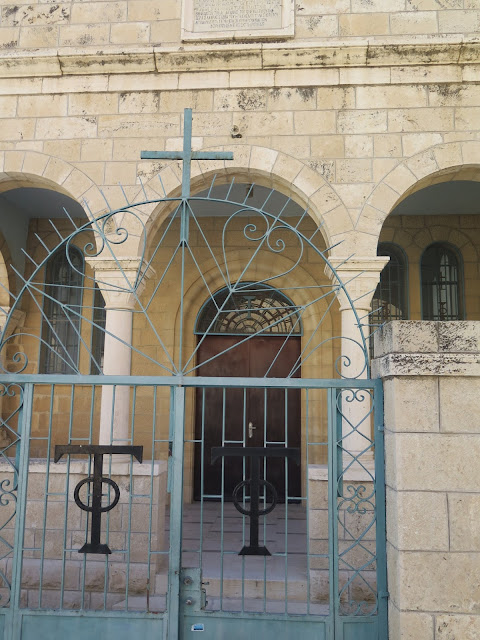 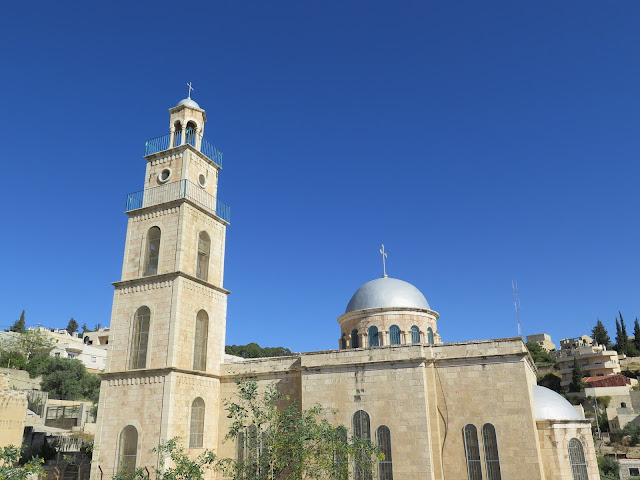 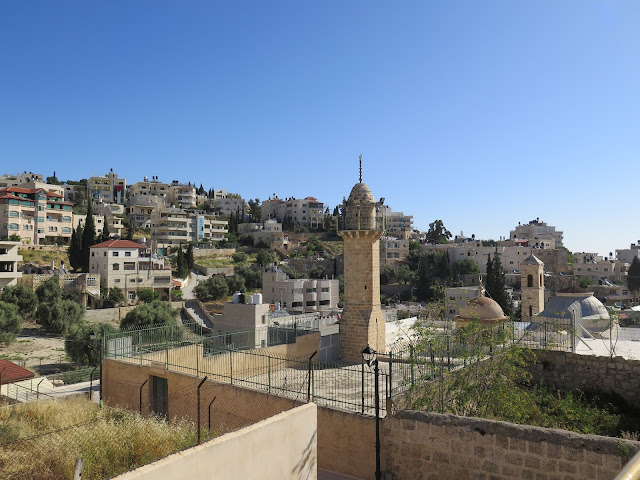 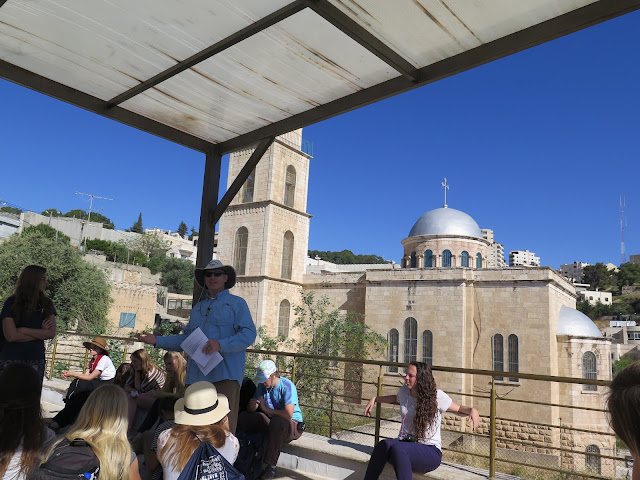 Photo: Dr. Allred explaining more about the significance of Bethany. Important things to remember about Bethany: 1) During the final week of Jesus' life, He stayed in Bethany. This is also the place where Jesus healed the man who had been blind for 40 years. The raising of Lazarus was a means to know Jesus was the Christ. 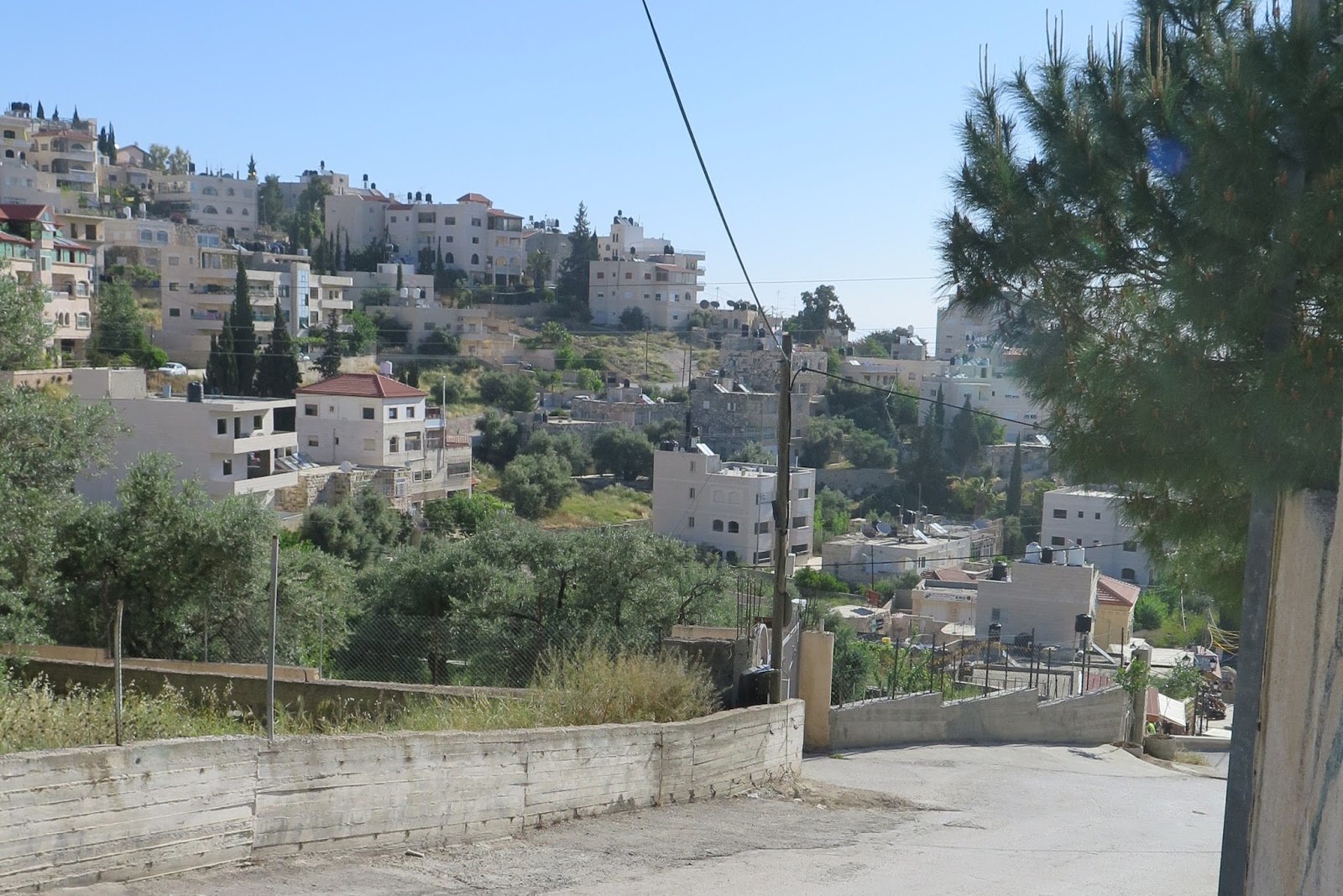 In Bethany, Jesus raised Lazarus after he had been dead for 4 days. 3) From near Bethany, Jesus sent 2 disciples to fetch a donkey colt for His triumphal entry. 4) In Bethany, Mary anointed Jesus' feet with costly ointment. 5) At Bethany, the resurrected Christ blessed His disciples before the Ascension.