So....an interesting night. I went to the Arlington store to try some of the new items.

I really wanted the Pique Will pants. I hesitated on them, because I bought the cocoa pique WUs last year and had to return them. At first I thought I returned them because of the pilling, but I remembered that it was because they had serious fraying around the ankles.

I tried the Skinny Will crops in the summer colors and fell in love with the fit. The roll down waist was so comfy. I wanted Soot Light, but they were all out my size. The bright colors look nice, but they were too sheer. 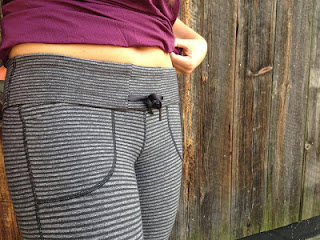 The more I saw the pictures, the more I wanted them. I didn't see a single picture that looked bad. They seemed to flatter everyone. I really wanted the Pique Wills, but figured I missed my boat. When they came out this week in a herringbone print, I decided to go to the store to try them on...even though I liked the pique ones better. They didn't have many new things in the Arlington store. I was disappointed that there were no herringbone Wills, but they said they were expecting a shipment tomorrow. 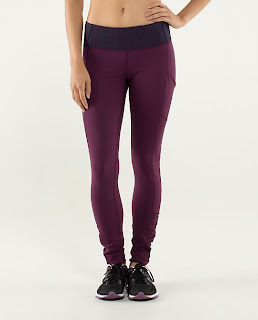 I actually liked these. They were a little on the long side (and I'm 5'7), but the ankle detail and side pocket were nice. They were comfortable, but I really couldn't justify them because they were more for running and less for lounging around or casual clothes.
Can't Stop Jacket 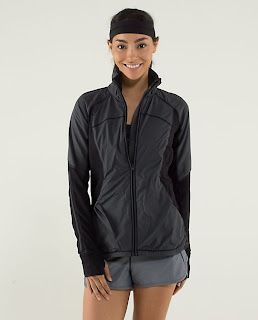 This one had nice material, but it didn't really scream special to me. I couldn't really justify the price....it would have to significantly reduced in price for me to get this jacket.
Skinny Will Pants 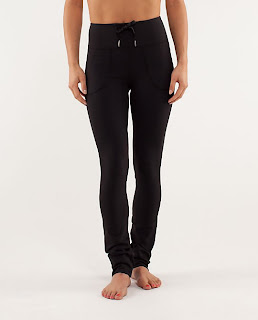 They were out of the Skinny Will Pant in a lot of sizes. I decided to give the black a try to see if I liked them. I tried a size 4 and they fit great....not too tight at all. I find myself getting a size 4 in luon and a size 6 in the luxtreme. They were very opaque. I had sheerness problems with the will crops before, but I couldn't see my underwear in the black.

I ended up getting the black Skinny Will pants. An educator was nice enough to call the P street DC store for me, and they happened to still have 2 of the pique Will Pants in my size. I decided to go over to the P street one, and exchange my black ones for the pique.

The pique ones were much softer, but both of them were equally  comfortable in different ways. I actually went up a size...they weren't super snug. They didn't give me muffin top, but I wanted the pique ones more for lounging.....a size up didn't make them look baggy and they were more comfortable.

I wasn't ready to get rid of my black ones, so I decided to keep them for now. I might still trade them in for the inkwell, but only if they are sheer....maybe an inkwell ziggy will pant (like the WUs) might come out, and I'll trade them in for another color. Hands down one of my favorite pants.....I want to do everything in them......workout, errands, louge....they are really great pants.

I also  ended up trying on the Rest Less tank in angel wing. I really liked the neutral colors and they draping was pretty in the front. The plum one was nice too, but I really liked the grey combo. The Arlington store had almost no sizes....with black being the only color in my size. The P street store had several colors, and all of the colors in my size :). 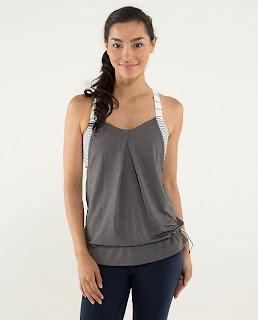 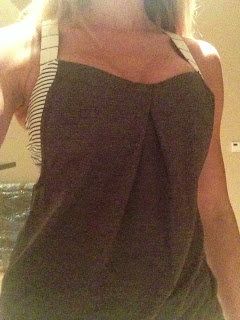 Sorry for the boob shot....hard to see the pretty details from far away. I think this top is much cuter in person than how they have it on the model on the website. 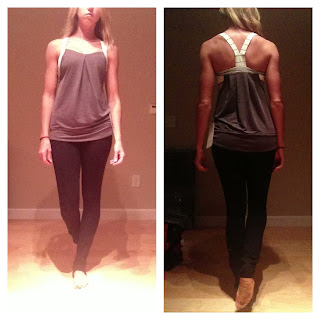 The back has good detail too. I did have to size up to a size 6 on this top.....I usually wear a size 4 (comfortably) in the practice freely and no limits tanks. The size 4 on this one was very constricting to my chest. 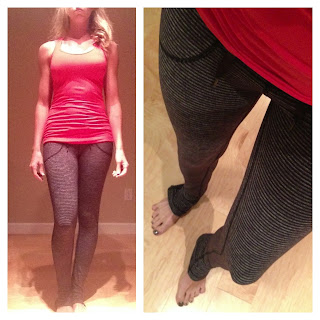 Wearing my love red CRB....The lighting in my apartment stinks. I have faux "facy" studio lighting, but it doesn't really provide very good light in my kitchen and dining room. Too close up and its glaring....too far away and there are shadows. The right picture got deformed when I rotated from landscape to portrait! Haha....no I don't have deformed feet! Very cozy pants!
So that's all for now! Let me know what you think! :) Should I keep the black or wait it out for another color? The more I try them both on, the more I want to keep them both!