Neot Kedumim, the Biblical Landscape Reserve in Israel, is located halfway between Jerusalem and Tel Aviv. The reserve is a re-creation of the physical setting of the Bible for visitors to see life as it was when people lived there 3,000 years ago. 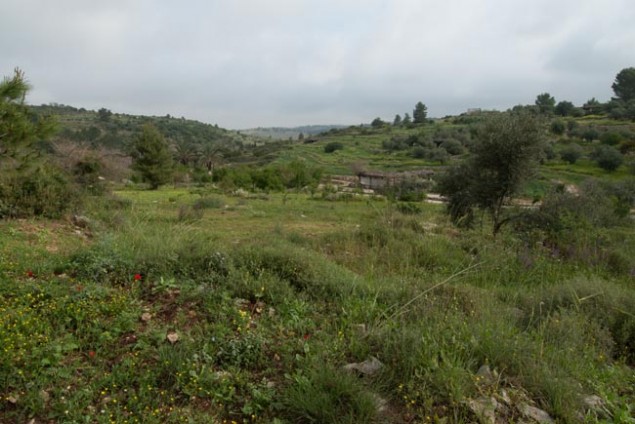 Neot Kedumim is modeled after landscapes referenced in scripture and places are named such as "The Dale of the Song of Songs," "The Field of the Seven Species," "Forest of Milk and Honey" and "Isiaah's Vineyard." The reserve comprises 625 acres which was once barren. 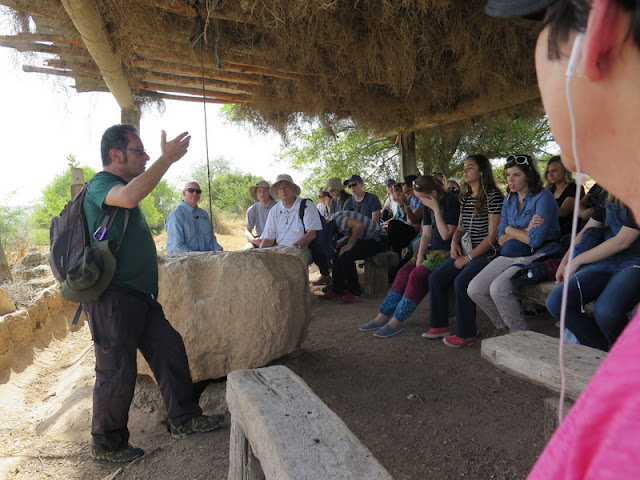 In the 1920's, a family immigrated to Palestine and always dreamed of developing a Biblical landscape. With the help of their son, a physicist, tons of soil were trucked in, hundreds of varieties of plants were cultivated, wine presses and ritual baths were restored and even reservoirs were built to catch runoff rain water. 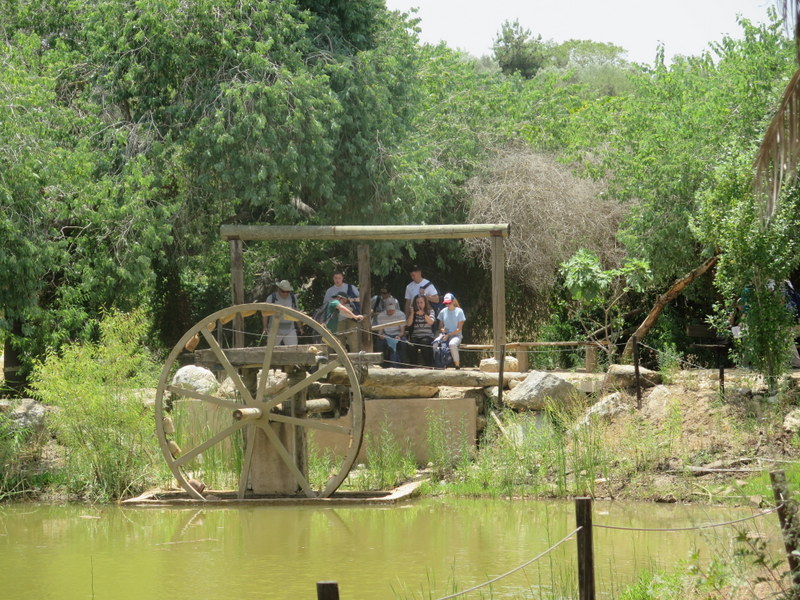 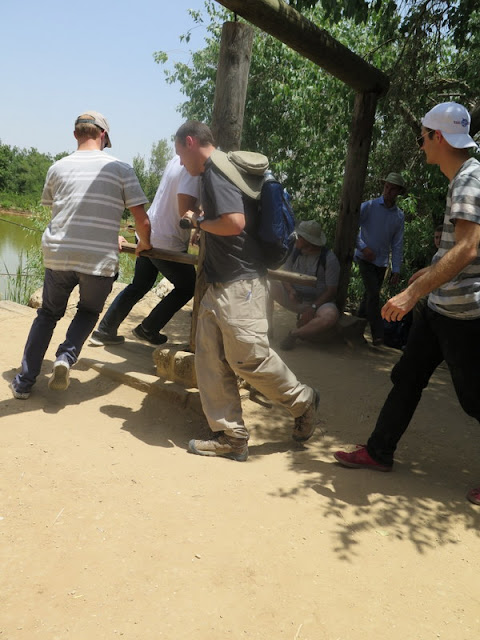 Try to imagine what Abraham and Sarah or the generation of Joshua might have seen when they entered the Land of Israel after forty years in the desert. Was it barren hills that still characterize so much of Israel today or could it have been quite different? 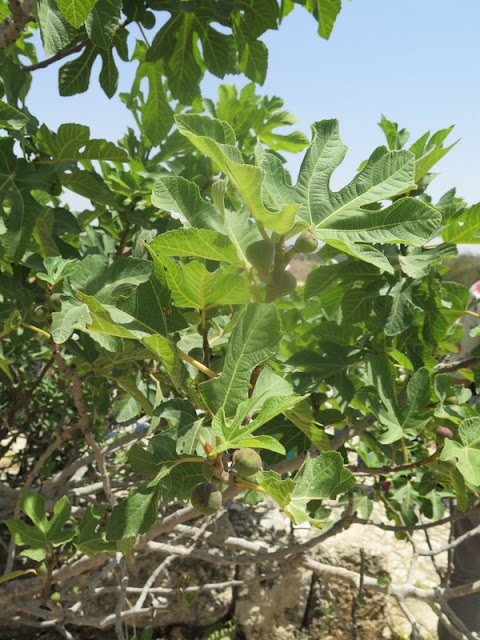 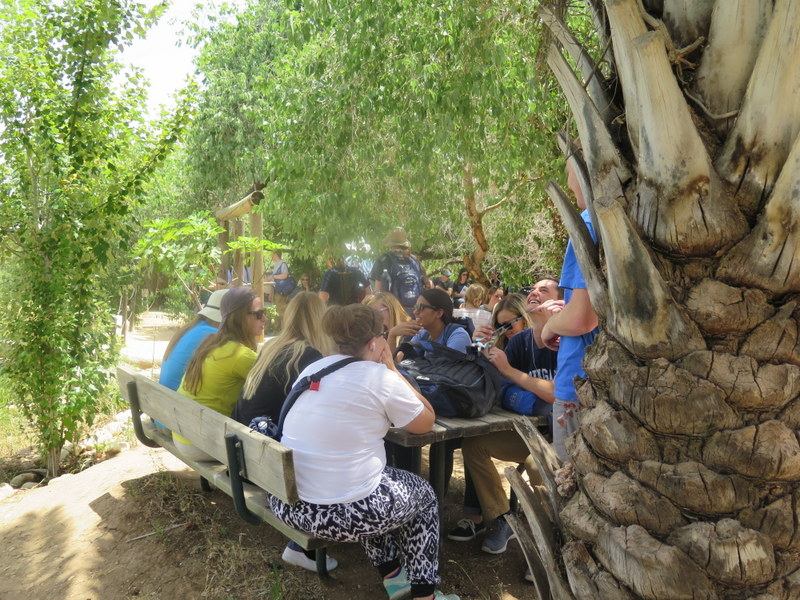 The Biblical “four species” include the citron tree, the date palm, the myrtle, and the willow and are all plentiful within the reserve and has over 80 different varieties of plants. 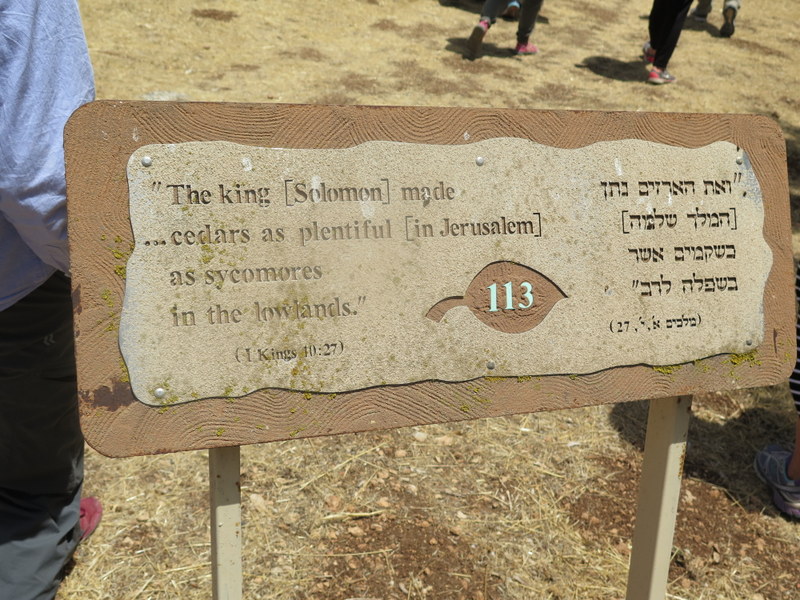 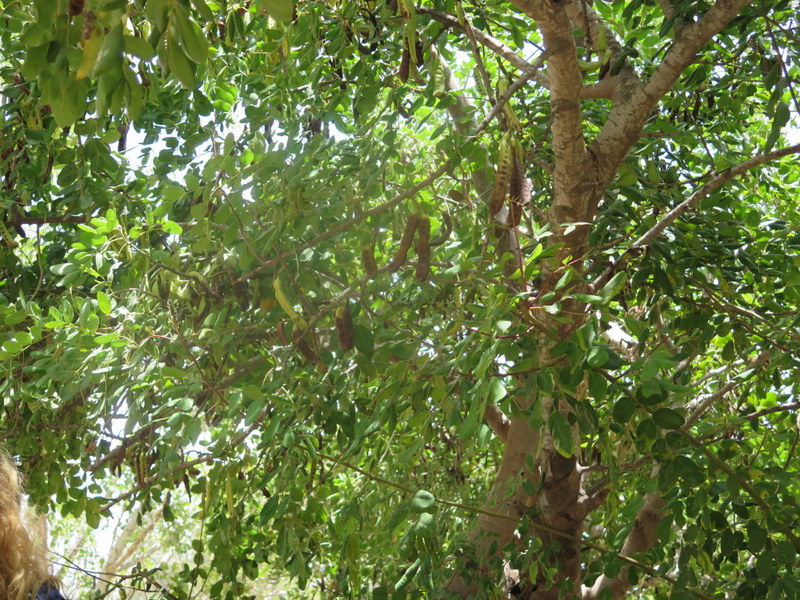 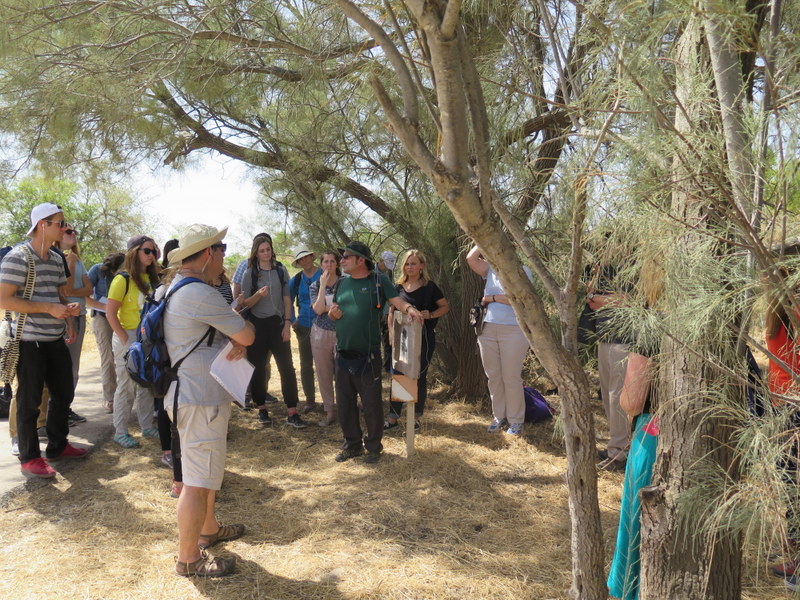 We accompanied the students and were met by a guide from the reserve. Neot Kedumin means "pleasant pastures of old." Tamarix aphylla grows as a tree to 60 feet in height. The tiny leaves along the branches exude salt and form a crusted layer on the surface and drip onto the ground beneath. The guide encouraged us to taste the needles of this tree. He explained that the tree absorbs salt from the soil and people who lived here so long ago would suck on the needles when they needed salt in their diets. 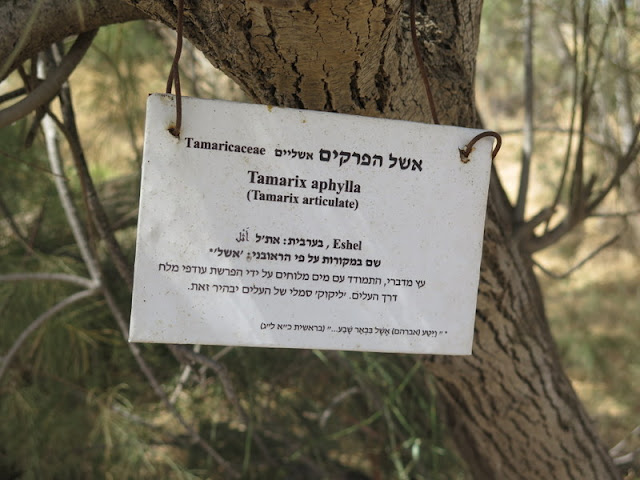 Seeing the type of vegetation that our forefathers saw, helped us to better understand the metaphors and lessons of the Bible in a way that only people who are personally familiar with the vegetation can fully grasp. Signs were posted throughout the reserve quoting Jewish texts in Hebrew and English. With plants right before our eyes, texts took on new life. 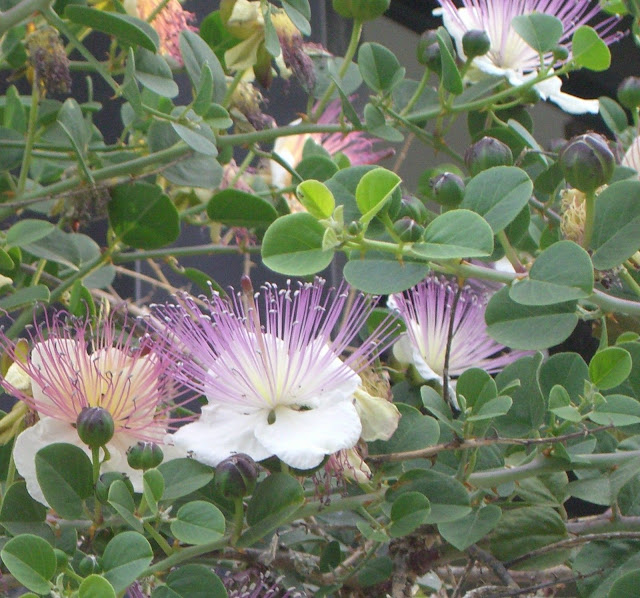 The buds (capers) of this plant are used in cooking. Mature caper bushes can grow three feet high and spread four or five feet. They require dry heat and intense sunlight to flourish. 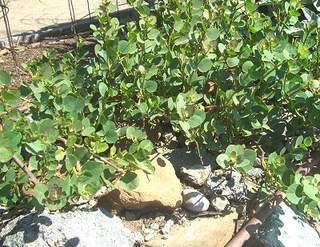 Neot Kedumim or "Oasis of Antiquity" has signs along every trail on which are written verses or quotes from the Talmud. There are 63 books or essays in the Talmud. Orothodox Jews believe that along with the the written law on Mount Sinai that there was also an oral law. Both are sacred and both comprise what is referred to as the Torah.

Psalm 128 refers to the blessing of being fruitful and having many children (“Your children will be like olive shoots surrounding your table,” 128:3). If you find an olive tree and look at its base you will usually see many little olive shoots. This particular tree wasn't growing and was dead, so another tree was planted inside. 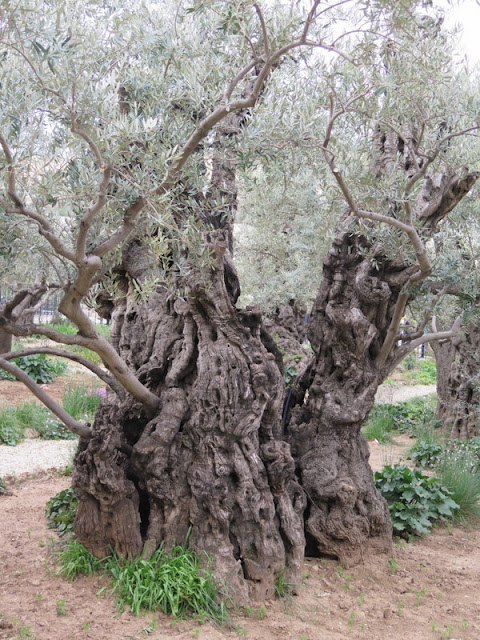 There is a sweet story about Rebecca in Genesis 24 and how she became the wife of Isaac. For Isaac and Rebekah, it was a tender beginning. Abraham was old when the story began and the Lord had richly blessed him with land, flocks, herds, maids, and servants but he had one concern: his son, Isaac was not married and he wanted posterity. Therefore, he called for his trusted servant, Eliezer, and asked if he would go to northern Mesopotamia and look for a wife for Isaac. 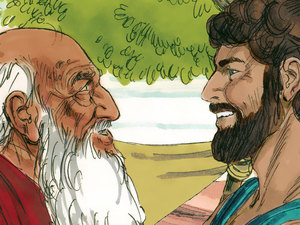 He said, however, he was not to take a wife from the Canaanites because they were evil and cursed by God. Eliezer made the promise to Abraham that he would do his very best to find a bride for Isaac and chose ten of Abraham's 10 very best camels loaded with supplies. He also packed several expensive gifts to give to the young lady to whom he would bring back as the chosen wife. When Eliezer reached the city of Nahor (in the country of Mesopotamia), he stopped to pray. He asked God to show him the right one when he asked one of them for a drink of water. If a young woman offered him drink and also for his camels, he knew she would be the young lady chosen to be Isaac's wife. 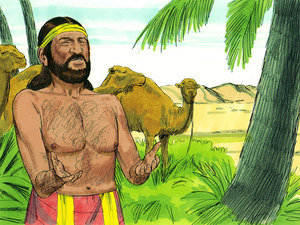 Just as Eliezer finished his prayer and stood up, the young ladies from the city of Nahor came to the well. They were talking and laughing and didn't even notice the stranger standing nearby. Eliezer noticed one particular young woman and approached her saying, "I have traveled a long way and am thirsty. May I please have a drink?" She smiled and gently replied, "Yes, I will give you a drink and I will also give all your camels water to drink." She quickly filled her pitcher with water and gave it to Eliezer. When he had finished, she filled the pitcher, then poured the water into a bucket and gave it to the lead camel. Then she went back to the well and refilled the pitcher for the next camel and repeated this over and over until all ten of the camels had enough water to drink. (This would have taken her considerable time and effort.) Right then Eliezer knew his prayer had been answered. 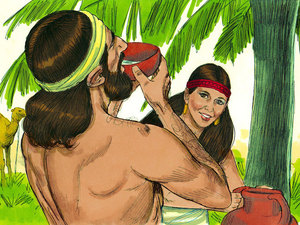 When all the camels were finally finished drinking, Eliezer reached into a pouch and took out a beautiful golden earring and two lovely golden bracelets and gave them to the young lady as a thank you gift. He then asked her name and asked if her father might have an extra room at his house so he could spend the night. She said, "My name is Rebekah and I am the daughter of Bethuel. Nahor is my grandfather" and invited him to bring his camels to her house because they had plenty of straw and food for them. 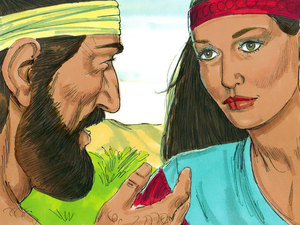 Eliezer bowed his head and worshipped the Lord right there at the well because his prayer had been answered and God led him exactly where he needed to be. He knew this was the right family and from Rebekah's actions of patiently giving water to all ten of his camels, he knew for certain that she was the right young lady to take home to be a bride for Abraham's son, Isaac. The story continues and if you are interested, you can read about how Isaac and Rebecca met and what happened after that. This is one of my favorite scripture stories. 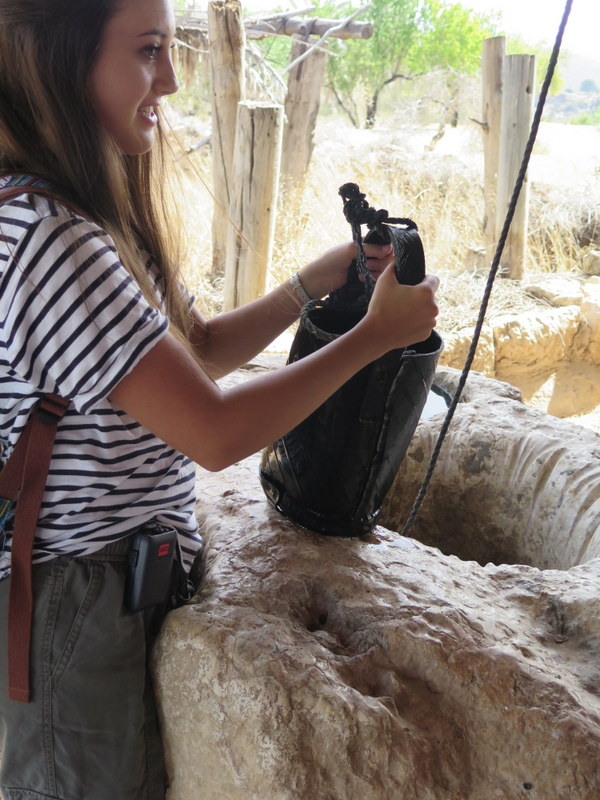 We were standing at a well similar to the type where Rebecca would have been and students had the opportunity to lower a bucket and pull it up full of water. We soon realized this was not an easy task and for Rebecca to do this for Eliezer and his 10 camels, it took a strong young woman. Rebecca, one of our students, was the first to try and I followed her. Having tried, we realized this was not easy and it would have been hard work. 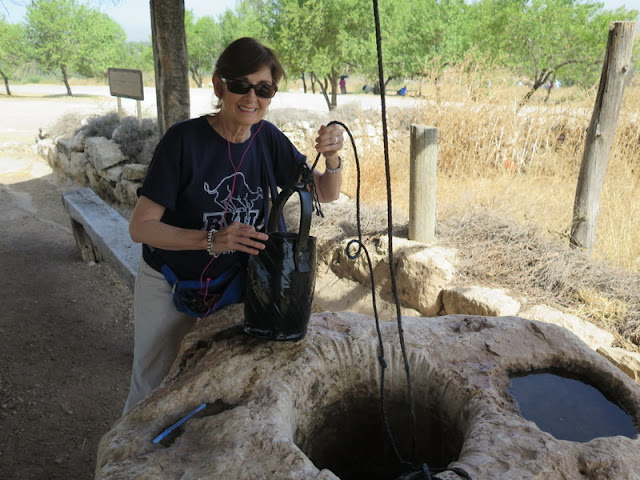 One of my favorite spots in Neot Kedumim was the sheep and goat pen where we were invited to move the animals from point A to point B. We were divided into groups and taught the method of moving sheep and goats and soon found it this was not easy. 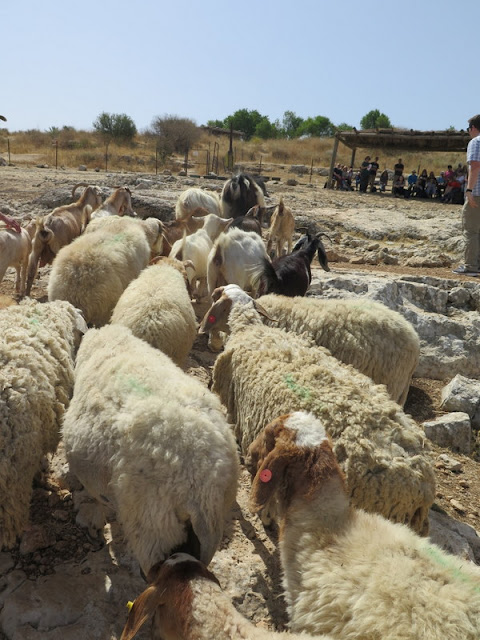 Shepherding is not simple! If the sheep aren't familiar with where you want to move them, you need several people to act as herders. You drive them from behind but need to do so slowly, calmly and quietly. 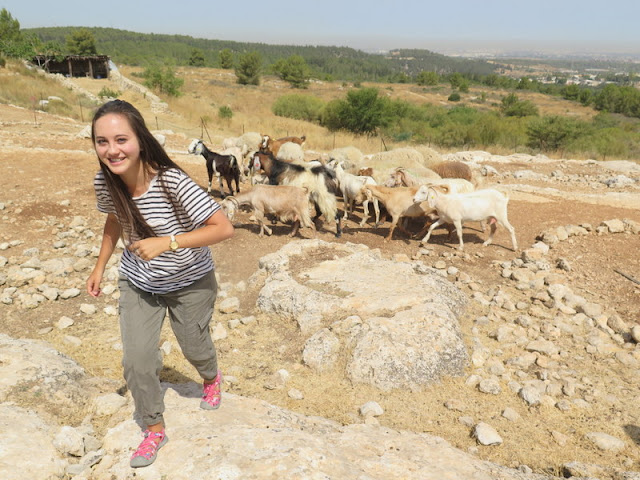 Sheep are actually quite smart and can learn vocal commands or to recognize the rattle of a feed bucket. I kept thinking of Omer who from the age of five had a heard of sheep of his own in Sudan. He had to take care of up more than 100 hundred at a time and stay with them at night and watch over them. I certainly gained an even greater appreciation for his experience as a nomad in Sudan before he came to America. 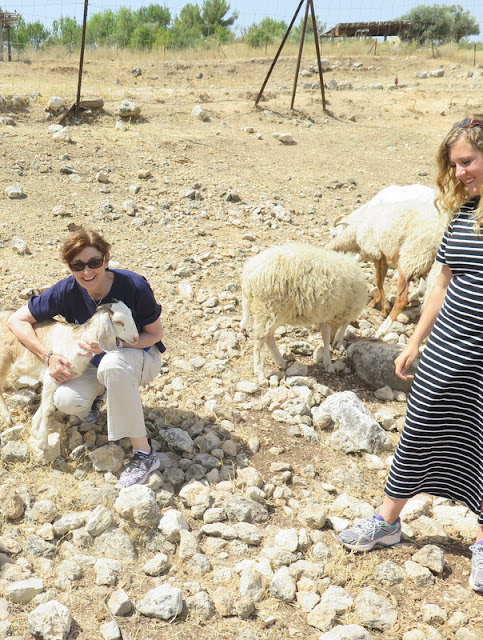 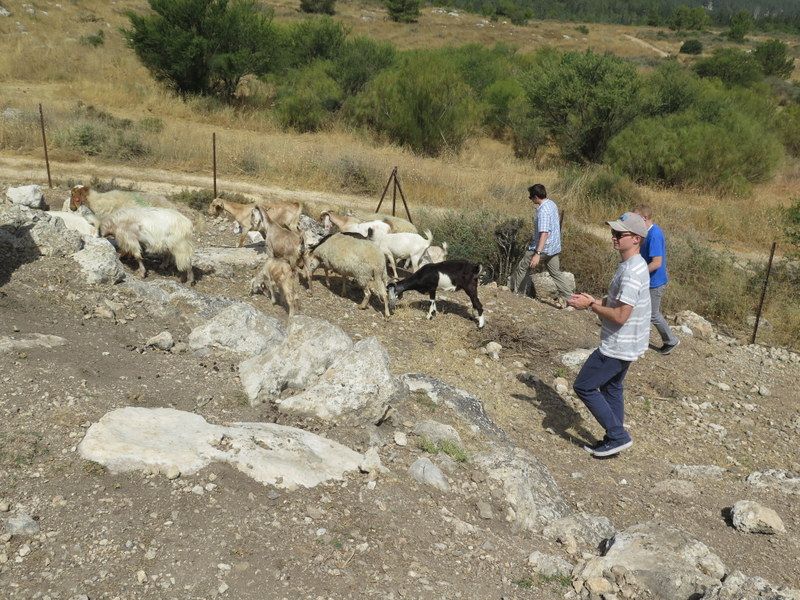 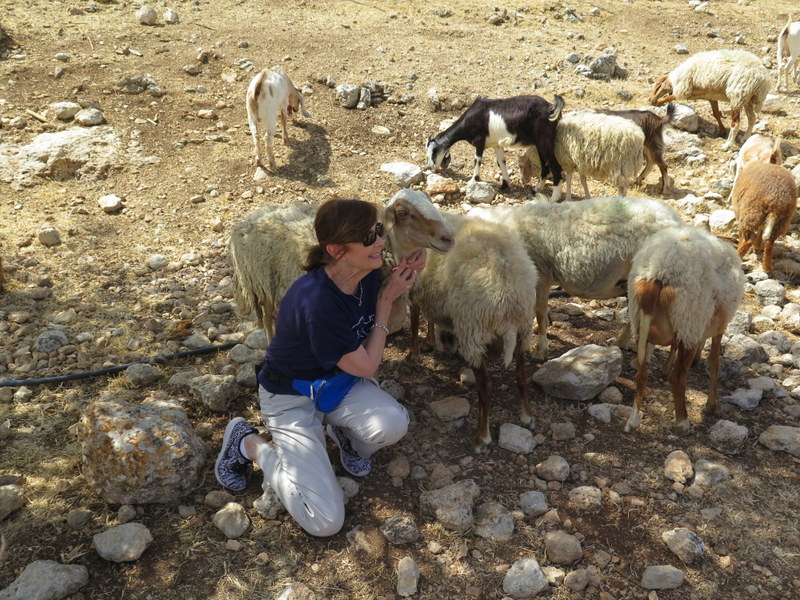 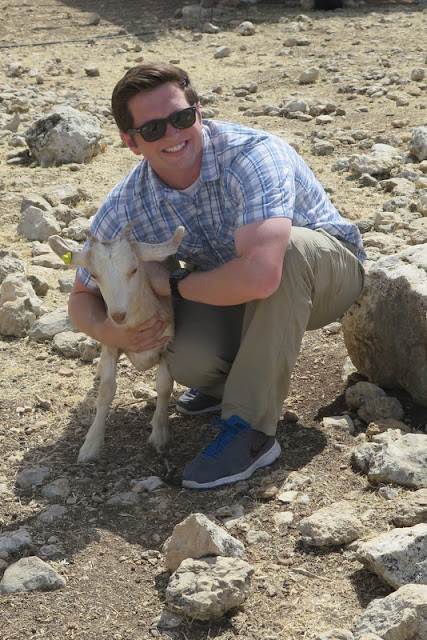 Dane Jensen was successful catching a goat as well as a few other students. In the ancient world, being a shepherd was evidently the ideal training ground for leadership as Abraham, Moses and David were all shepherds. We walked away with a renewed sense of understanding and awe with regard to the Shepherd of all mankind. (To be continued . . . . )