In December Oxford University Press launched the newly designed online version of OED. The editorial board (one of its members is the pronunciation consultant Clive Upton) re-designed, among other things, the way the pronunciation of a word is displayed:

The screenshot shows the pronunciation of the word 'incomprehensibility'.
One of the new features is the fact that one can click on the pronunciation and a window pops up which displays the 'meanings' of the transcription symbols. Here's an example: 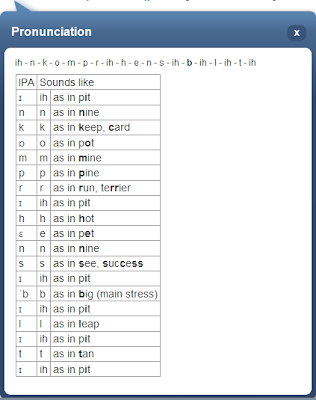 There are three columns. The left column contains the phonetic symbols; the center column displays a a letter or two intended to represent the sound and the right column indicates one or two model words.
What's missing, by the way, is the secondary stress on the 2nd syllable of 'incomprehensibility'.