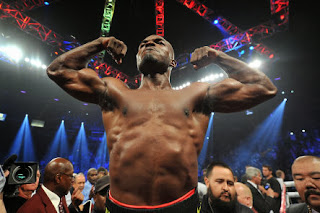 Timothy Bradley successfully defended his World Boxing Organization welterweight championship by defeating Juan Manuel Marquez on a 12-round split decision Saturday night in Las Vegas.
Bradley, who was born in Cathedral City and lives in Palm Springs, won on one scorecard, 115-113, and 116-112 on a second. Marquez won 115-113 on the third.
"It feels amazing," Bradley told HBO. "I knew this was my moment and I told everybody that would listen."
The 30-year-old Bradley improved to 31-0, with one fight ending in a no contest. The 40-year-old Marquez, who was born in Mexico City and lives in Anaheim, fell to 55-7-1. He has won seven world championships in four weight classes.
Bradley said Marquez made adjustments as the fight progressed.
Bradley was vague about his future plans, saying, "I want to fight nothing but the best. Now I've got to be considered the top three in the world" on a pound-for-pound basis along with World Boxing Council and World Boxing Association junior middleweight champion Floyd Mayweather Jr. and Andre Ward, the WBA super middleweight champion.
Before the fight Bradley called Marquez "probably the best fighter I will have ever faced in my career, by far."
—City News Service.